THE MYTHS WE LIVE BY

Well, I preferred The Myths By Which We Live - but the publishers won...

Some 'Look Within' is available at Amazon:

be it for better or worse... 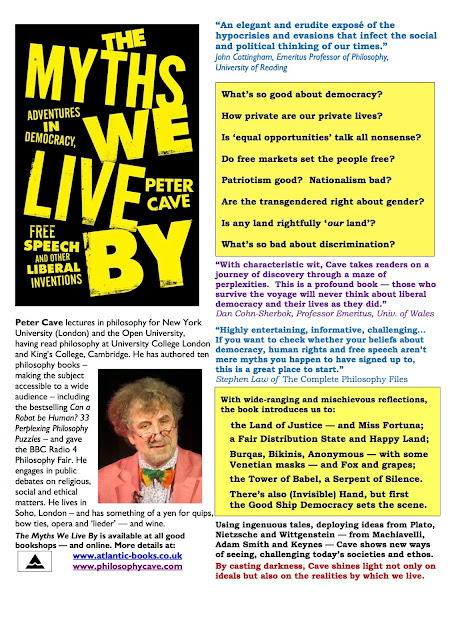 Latest book: out Sept 2019: THE MYTHS WE LIVE BY: Adventures in Democracy, Free Speech and Other Liberal Inventions 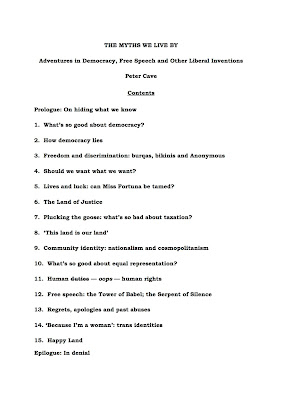 For video clips of philosophical perplexities:


mind you,
the clownish face and bow tie
may generate an initial shock...
Posted by Peter Cave at 11:14 No comments:

The Dilemma - well, a pithy letter

For those of us eager for social justice and an end to the appalling inequalities in society, the EU referendum poses a genuine dilemma.

Were future UK governments to be by Corbyn or similar, we should surely leave the EU for we are then less likely to be so dominated by capitalist imperatives and undemocratic commissions.

Were future UK governments to be by Cameron and his ilk, then surely we need to stay within the EU as at least it offers us some protection from the Tory obsession with privatisation and the dilution of social welfare and human rights.

I suppose an optimist might argue that if the vote is to leave the EU, the Cameron government falls, the Tory party splits, and Corbyn comes to power – thus giving us what we want. True, that is a long shot.

Global corporations that make profits in Britain, yet pay negligible tax typically argue that they are acting within the law.  No doubt that is true - well, often so.

Think of personal cases, though.  Acting within the law does not let you off the hook when being greedy, disloyal or passing by on the other side.

And so it is that contrary to the corporation defenders, compliance with corporate tax law does not thereby let the corporations off the hook regarding their derisory tax payments.

After all, if your friends contrive to avoid you, when owing you money, you'll not think much of them; and when these corporations, while reaping the benefits of a UK location, arrange their affairs to avoid tax, well, what does that tell us of the ethos of those companies?

True, one may argue that corporations are not persons and not liable to moral evaluation; but in fact corporations seek praise when they announce how they treat customers fairly or have given so much to charity or look after employees well - so, if those moral evaluations are acceptable, then also the condemnation regarding their tax avoidance ploys.

Cameron, Christmas and the New Year


1. Well, we know that David Cameron has form - when, for example:

he forgets which football team he 'avidly' supports;

and, quoting Corbyn out of context, disgracefully accuses Jeremy Corbyn of being a hater of Britain and someone who sees Bin Laden's death as a tragedy in contrast to the victims' deaths.

2. His latest gems have come from his Christmas and New Year messages.

(a) In his Christmas message, Britain, proclaims David Cameron, manifests Christian values of 'peace, mercy, goodwill and, above all, hope'. That sounds splendid, save for two mistakes.

First, Jesus was not consistently peace-loving - according to reports, for example, those who did not want him as king should be killed (Luke, 19: 27) - and some sincere followers of Christianity have hardly consistently manifested peace, mercy etc., but have forced conversions and also threatened many non-believers with eternal damnation.  Of course, there are nuances and nuances.

Secondly, courtesy of Cameron's government, Britain's recent treatment of the poor neither manifests goodwill nor offers them much hope - as many will testify, suffering benefit cuts or disparagement at job centres and by the well-off as work shy.


(b) In his New Year message, Cameron condemns those who "shout into megaphones, wave banners and sign petitions".

So, were he to be consistent, he would be condemning, for example, the suffragettes, the various anti-apartheid and anti-racist marches - and, indeed, his friends who marched in favour of fox hunting.

He seems to forget that there is more to democracy than a dubious 'first past the post' electoral system that delivers government to those who received the support of only around 25% of those registered to vote and  a much lower percentage of the total of those registered to vote combined with those who were eligible to register but did not do so.

3.  We could add to the list the delivery of the knighthood to Lynton Crosby for his 'political service' which, I heard, was described as his 'contribution to democracy'.  Now, did 'democracy' really benefit from that service and contribution?


For the advice to Ms Turkey, please right click on and 'open link in new tab':
Humpty_Dumpty advises Ms Turkey

Yet what does Humpty Dumpty mean?

For more, please right click on and 'open link in new tab':