For the advice to Ms Turkey, please right click on and 'open link in new tab':
Humpty_Dumpty advises Ms Turkey

Yet what does Humpty Dumpty mean?

For more, please right click on and 'open link in new tab':


What flavours do you have?’ asks Lucinda, contemplating the homemade ice creams.  ‘Chocolate, cherry and coffee,’ comes the reply.
Lucinda ponders for a moment or two, not exactly happy with a choice so limited. ‘I’ll have the coffee,’ she decides.
The waiter takes her order, but as he turns to walk away, he remembers, ‘Ah, we also have plum, peach and passion-fruit.’ ‘Splendid!’ says Lucinda. ‘I’ll go for the cherry.’


We all have preferences, often different preferences – and what we prefer depends on context, on the options available. Now, the Lucinda story generates a smile of bafflement: how can knowledge of the plum, peach and passion-fruit options lead her preference to switch from coffee to cherry, given that she rejected the cherry earlier on? That seems paradoxical.

It does seem paradoxical; but we can tell a tale and the paradox vanishes. We hypothesize that Lucinda was initially unhappy with going for cherry, but only because it appeared to be the sole fruit flavour available.  ‘Maybe the ice cream maker lacks expertise in flavouring by fruit,’ she pondered.
On learning the availability of other fruits, Lucinda gained confidence in the maker’s fruity abilities. With such confidence, she could go for her top preference, namely, the cherry – but only when other fruits are available. Her preference for coffee gains top place, when only one fruit is available. Context affects her preference between coffee and cherry.
With that background point to the fore, let us see if it helps with some preference paradoxes and how we can ‘pump money’.

Extract from (right click): The Big Think Book
Posted by Peter Cave at 13:57 No comments:

One of the Ninety-Nine from THE BIG THINK BOOK

has a mini video and animation Do we make the stars in the sky? Whatever are these things called 'time', 'love' and 'the self'? Engaging philosophical perplexities, from the serious to the whimsical, The Big Think Book also introduces tales, whereby we meet Frog and Scorpion, Humpty Dumpty and Ms Turkey, Ant and Grasshopper, Sloth and Flutterby... not to mention some thoughtless Barbarians. The Big Think Book takes readers from the wonderful to weird; from the funny to the provocative – and to very deep matters indeed.

With the aid of tall stories, jokes, fascinating insights and common sense, the book offers a comprehensive survey of all areas of philosophy, addressing the big questions in ethics and politics, aesthetics and logic, the emotions and religion, knowledge and metaphysics… of reality.

Replete with a smorgasbord of amusing and mind-boggling cases, this is perfect for delighting in life’s conundrums. 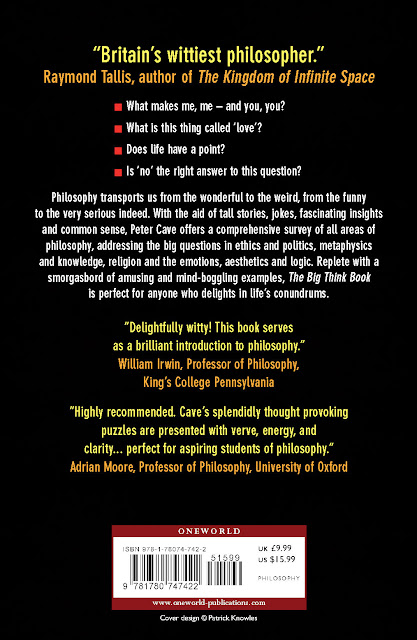 ETHICS well, the animations may appeal, if not the burbles...?


To show some of the anguishes and thoughts in Ethics, I am seen burbling at the link below.  Those burbles may well er....er....who knows what - but the odd animations after a minute or so could well appeal: 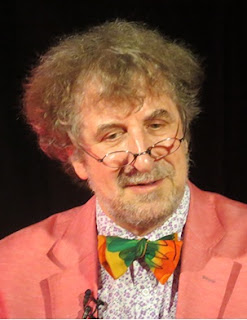 The British conservative government trumpets the importance of home ownership.  It is so important that charitable housing associations are to be forced to sell their properties at a discount to existing tenants.  Well, let us reflect:

If property ownership merits such high priority, why does the government not grant a “right to buy” against those who have “bought to let” a second property?

After all, thousands of people have bought second properties purely as investments to secure rental income and capital growth. Private tenants have little security of tenure, little control over rent increases and have no share of the property value.

Therefore, if we must think in terms of property ownership as being so important, then if anyone deserves the right to buy at a discount, it is those tenants — or at the very least they deserve the right to a share in the property’s increase in value.

What is, dare I say, sauce for the social tenant goose should also be sauce for the private tenant gander.
Posted by Peter Cave at 18:55 No comments:

Well, I could not resist sending the following to the FT which kindly published it:

For the British economy to grow - and hence for Britain to reduce its debt - corporation tax must be lowered and people must not pay so much income tax.

For the Greek economy to grow, corporation tax must be raised and the people must pay more income tax.

We mere mortals can but marvel at the subtleties of our political masters in their understanding of matters financial - for the ways of the 'Market' are mysterious indeed to the unenlightened.

Suppose ten philosophers, attending an international  convention, are sitting in a semi-circle at the dining table, having just finished some gorgeous creamy dessert in which they all delighted. They can see everyone’s face, except their own. No mirrors, no squinting allowed; and they are not permitted to confer. You are the draconian waiter, gazing at them all.

No philosopher knows that he has cream on his lips; he cannot see himself. Just two of them have, though, been messy eaters this time, their lips all creamy; the others, surprisingly, are sparklingly clean. For ease, let us call those with cream on their lips ‘creamy’.

Naturally, all of them,  being philosophers, are perfectly rational reasoners – despite the flow of wine – ready to obey instructions. (Well, true, there is something a little 'out of this world' re this puzzle.)

You say to them, ‘Hands up all those who know that they are creamy.’

uppose the same set-up, except that, before any instruction, you announce, ‘At least one of you is creamy.’
Of course, they knew that in the first scenario: they could all see at least one creamy philosopher. Your announcement, though, magically it seems, alters what will happen.

You now instruct, ‘Hands up all those who know they are creamy.’

No hand is raised.

You make the same demand again, ‘Hands up all those who know they are creamy.’

Amazingly, the two creamy philosophers, and only those two, do now put their hands up. Your announcement, yet of what they each already knew, made all the difference.

Why did the creamy philosophers now raise their hands?

[This puzzle has a long history from unfaithful wives to muddy children.]
Posted by Peter Cave at 14:52 No comments:

some words may be worth reflecting upon: 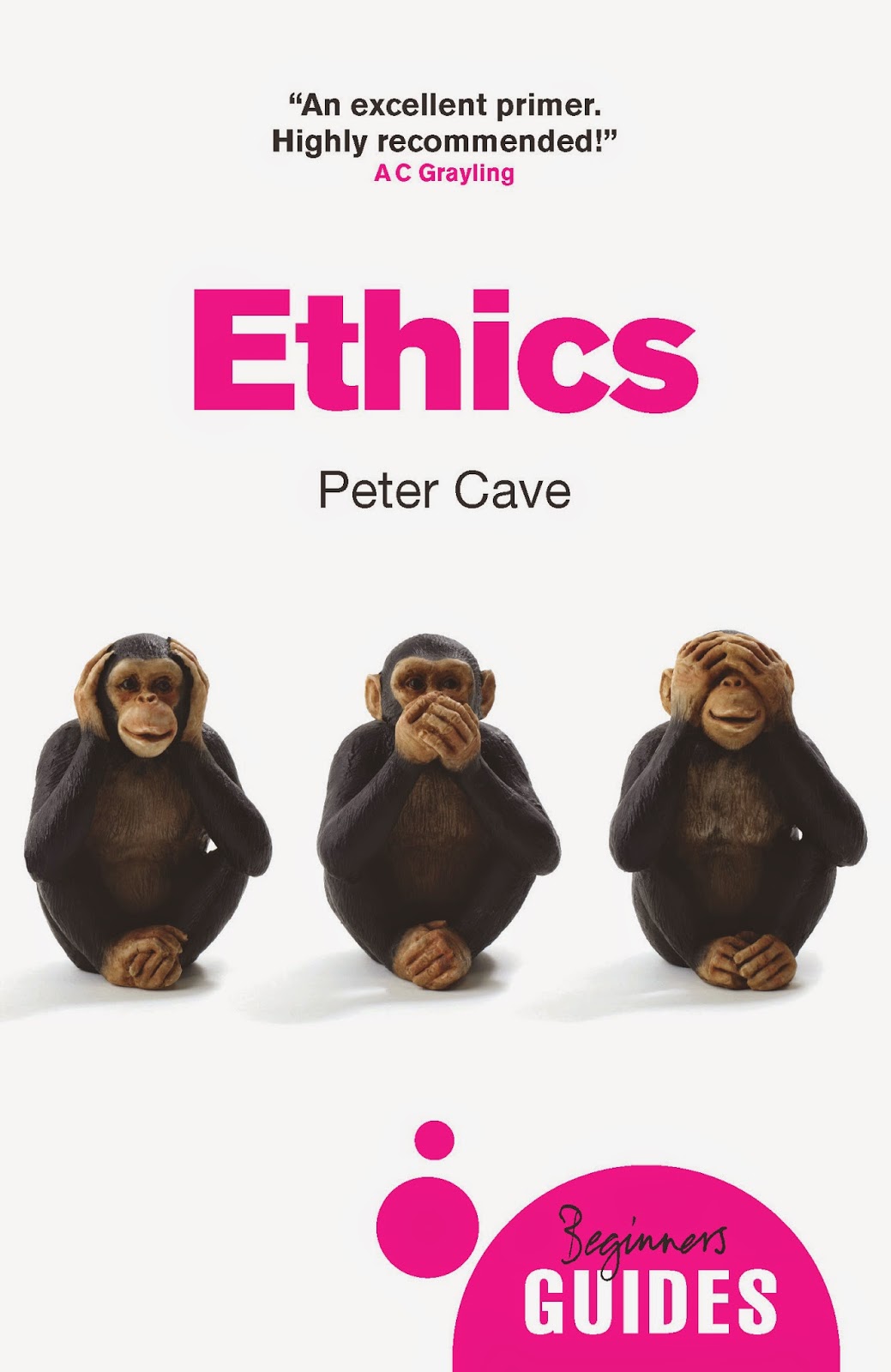 Professor Ray Tallis:
‘Lucid, witty, erudite, and wise. This is more than  a brilliant survey of ethical theories: it is an invitation to reflect on your life and to challenge your own settled views. This Beginner’s Guide will take you far from the place where you began it.’
Ray Tallis, Professor Emeritus of Geriatric Medicine, University of Manchester – Patron of Dignity and Dying, philosopher, author.

Professor Michael Clark
‘Rich, comprehensive and provocative, with illustrative examples that are original and stimulating... altogether a fine and authoratative introduction to the subject.’
Michael Clark – Professor Emeritus, Philosophy, University of Nottingham; Editor of Analysis

Professor Dan Cohn-Sherbok:
'With characteristic verve, Peter Cave explores the key issues of ethics in this readable, entertaining, and informative introduction. Surveying a wide range of topics – including utilitarianism, existentialism and applied ethics – he challenges readers to think their way through complex moral problems. For those seeking to make sense of life's dilemmas as well as students enrolled in philosophy courses, this is an ideal guide.'
Rabbi Dan Cohn-Sherbok, Professor Emeritus of Judaism, University of Wales

Professor A C Grayling
'Peter Cave writes with clarity and humour; this is an excellent primer for anyone beginning the study of ethics. Highly recommended!'
A C Grayling, Master of New College of the Humanities, London, Fellow of St Anne’s College Oxford, formerly Professor of Philosophy, Birkbeck College London

Professor Andrew Pessin:
‘Peter Cave has done it again. Ethics: A Beginner’s Guide is a must-read for any student of ethics, formal or informal, beginner or advanced. It is thorough and complete, yet always accessible and entertaining, written in Cave’s signature sharp style. With plenty of intriguing examples and provocative thought experiments, with many useful references drawn from literature, the arts, and real life, the book masterfully guides the reader from the concrete up to the theoretical. It begins with leading moral theories, then moves onto loftier discussions of religion, existentialism, and human freedom, peaks with a survey of meta-ethics—then re-descends to the debates over some of the most controversial practical moral concerns of our day. Its final chapter is a literary tour de force in itself, an extended meditation on the central role of moral dilemma in the human condition. No matter who you are, no matter what your background, this book will inform and challenge you — just as moral philosophizing should.’
Andrew Pessin, Professor of Philosophy, Connecticut College